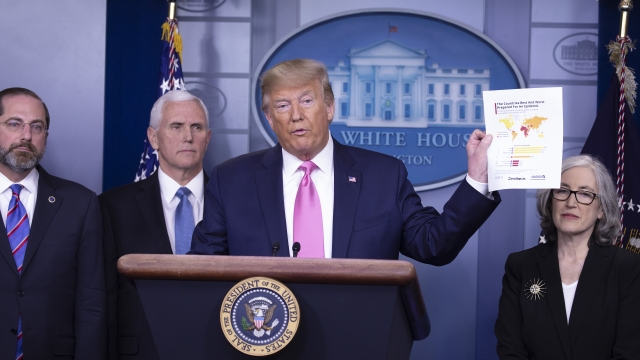 During a news conference on the coronavirus Wednesday, President Donald Trump said his administration is prepared to take on the virus and is putting Vice President Mike Pence in charge of the U.S.' response team.

"We're ready to adapt and we're ready to do what we have to as the disease spreads, if it spreads," President Trump said.

Health and Human Services Secretary Alex Azar announced a new case of the coronavirus in the U.S., bringing the total to 15. This does not include those who have been repatriated from Wuhan, China, and the Diamond Princess cruise ship. President Trump said of those 15, eight have returned to their homes to finish their recovery and five people have already fully recovered.

The administration said the threat to the American public remains low.

On Tuesday, the CDC warned the coronavirus will spread in the U.S. and told Americans to brace themselves.

"Our aggressive containment strategy has been working and is responsible for the low levels of cases that we have so far. However, we do expect more cases, and this is a good time to prepare."

Last month, the Trump administration declared the outbreak a public health emergency. The White House wants $2.5 billion to fight the coronavirus, but Democrats have said the administration's plan is not good enough. Senate Minority Leader Chuck Schumer has put forward an $8.5 billion plan, and President Trump said he won't say no to more money.

"If they want to give more, we'll do more," President Trump said. "We're going to spend whatever is appropriate."