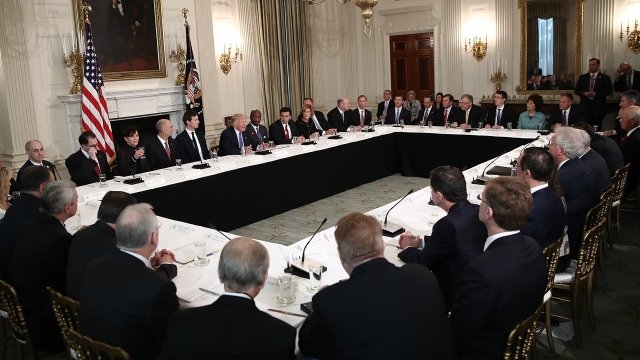 SMS
Trump Goes After Former Members Of His Advisory Council

President Donald Trump seems to be trying to discredit some former members of his manufacturing advisory council.

Several stepped down after Trump was slow to name and denounce white nationalist groups involved in a deadly weekend rally in Charlottesville, Virginia.

Trump made broad statements blaming "many sides" shortly after the incident, then specifically chastised white supremacists and other hate groups in a statement two days later.

But at an infrastructure press conference Tuesday, Trump seemed to double down on his original statement. Shortly afterward, two top labor leaders resigned from his council.

AFL-CIO President Richard Trumka and his deputy chief of staff, Thea Lee, both resigned from the council Tuesday. Trumka said: "We cannot sit on a council for a President who tolerates bigotry and domestic terrorism. President Trump's remarks today repudiate his forced remarks yesterday about the KKK and neo-Nazis."

Trump claimed the CEOs who left his council "weren't taking their jobs seriously" and that some were leaving in embarrassment because they manufactured their products outside of the U.S.

He also called the moves to step down "grandstanding."

Kenneth Frazier, CEO of Merck, said when he left the council that American leaders need to "clearly [reject] expressions of hatred, bigotry and group supremacy."

And another departing CEO, Kevin Plank of Under Armour, tweeted: "There is no place for racism or discrimination in this world. We choose love & unity."