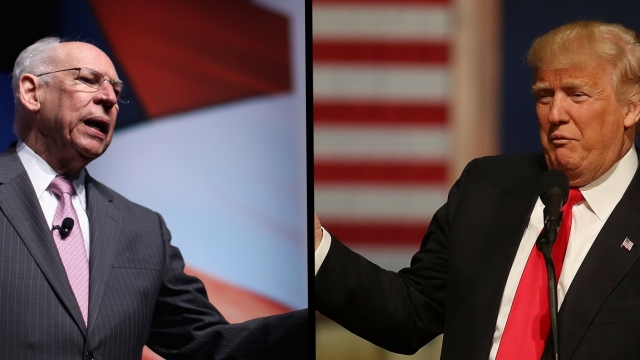 Donald Trump has taken another one out of the tabloid pages. This time, he's insinuating Ted Cruz's father is connected to Lee Harvey Oswald.

Donald Trump thinks there's something up with Ted Cruz's father.

"His father was with Lee Harvey Oswald prior to Oswald's being — you know, shot. I mean, the whole thing is ridiculous," Trump said in a phone interview with Fox News.

Specifically, the GOP front-runner thinks Rafael Cruz may have had some sort of connection to the assassination of John F. Kennedy.

The National Enquirer tabloid ran a story in April alleging the same thing, though with shaky evidence at best: a photo of Lee Harvey Oswald with an unidentified man the tabloid suggests is the elder Cruz.

But it's worth noting that even the experts the National Enquirer hired to analyze the picture wouldn't say the man is Rafael Cruz — just, basically, that it looks like him.

Cruz's campaign told McClatchy the claim was "another garbage story in a tabloid full of garbage." The National Enquirer, by the way, has endorsed Trump.

This video includes clips from The U.S. National Archives and Records Administration, Fox News and Cruz for President and images from Getty Images.