Trump's Tax Plan Does Some Major Favors For Rich Americans 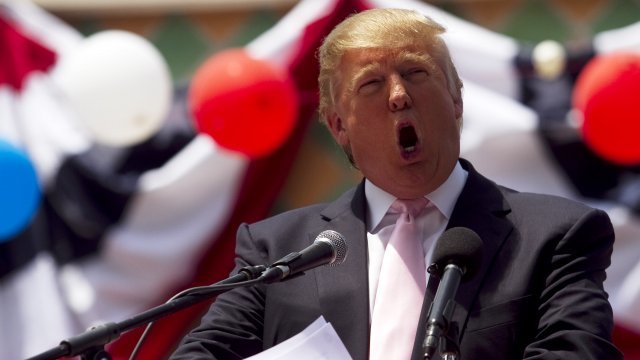 SMS
Trump's Tax Plan Does Some Major Favors For Rich Americans
By Gabrielle Ware
By Gabrielle Ware
September 28, 2017
Low- and middle-income people won't get the benefits of some of these tax cuts.
SHOW TRANSCRIPT

President Donald Trump is selling the long-awaited details of his tax reform plan as a boost for the middle class at the expense of big earners like himself.

During his speech in Indiana, Trump said: "Our framework includes our explicit commitment that tax reform will protect low-income and middle-income households, not the wealthy and well-connected. They can call me all they want. It's not going to help. I'm doing the right thing, and it's not good for me. Believe me."

But Trump's tax plan actually has some major benefits for wealthy Americans.

Right now, the 39.6 percent tax rate is for individuals who make above about $420,000. Trump wants to slash that down to 35 percent, and he could potentially raise the threshold where that rate kicks in.

Trump's outline also gets rid of the controversial estate tax, which puts a 40 percent tax on wealth passed on to family members after someone dies. But that tax only covers estates over $5.49 million — which affects less than 1 percent of the population.

He said: "The AMT is actually a shadow tax system that requires many people to calculate their taxes two different ways and pay the higher of the two amounts. You're all familiar with it."

There's actually a good chance you're not.

AMT is designed to counter tax loopholes that could give higher income households a lower rate. It primarily affects about 60 percent of households making between $500,000 and $1,000,000 a year.

But all this could change; the White House's tax reform plan is only a rough outline for now. It's up to Congress to hash out the fine details.