Trump To Visit The UK For A State Visit In June 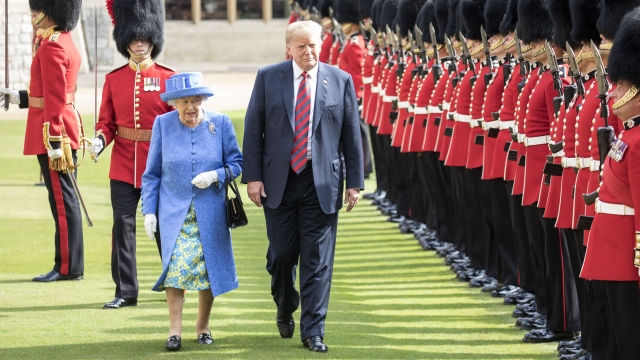 SMS
Trump To Visit The UK For A State Visit In June
By Katherine Biek
By Katherine Biek
April 23, 2019
Buckingham Palace announced Tuesday that the president had accepted the queen's invitation for a state visit.
SHOW TRANSCRIPT

President Donald Trump is heading back to the U.K. this summer.

Buckingham Palace announced Tuesday that the president had accepted Queen Elizabeth II's invitation for a state visit. That three-day visit is scheduled to start June 3.

While there, the White House said President Trump will also meet with Prime Minister Theresa May and attend a ceremony to mark the 75th anniversary of D-Day.

President Trump visited the U.K. last year. And although he did meet with the queen for tea, the trip was billed as a simple working visit.

Comparatively, the president's visit this time will have a whole lot more pomp and circumstance. Previous state visits hosted by the queen have included a ceremonial welcome featuring a royal gun salute, a carriage procession and a state banquet held at Buckingham Palace.

Once their U.K. trip is over, President Trump and first lady Melania Trump will travel to Normandy in France to observe another commemorative D-Day ceremony and meet with French President Emmanuel Macron.