Trump To Nominate Heather Nauert As Next UN Ambassador 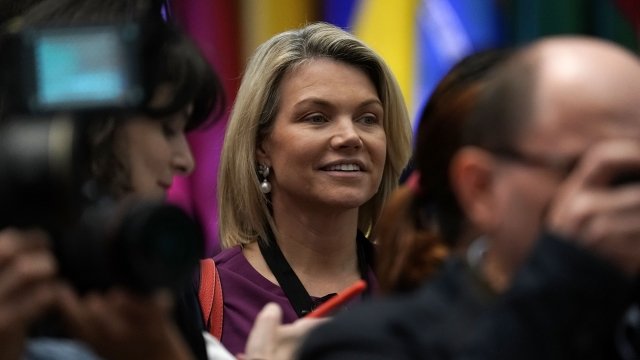 SMS
Trump To Nominate Heather Nauert As Next UN Ambassador

By Katherine Biek
December 7, 2018
Nauert currently serves as the spokeswoman for the State Department.
SHOW TRANSCRIPT

President Donald Trump announced Friday morning that he's nominating State Department spokeswoman Heather Nauert to be the next U.S. ambassador to the U.N.

Nauert will replace Nikki Haley, who unexpectedly announced back in October that she'd be leaving her post at the end of the year.

The president revealed last month that he was considering Nauert for the ambassador role. Critics view her as an unusual choice since she doesn't have much in the way of government experience.

A former Fox News host, Nauert joined the State Department in April 2017 and has served as the spokesperson for both Secretaries of State Rex Tillerson and Mike Pompeo.

But sources told Bloomberg that White House aides view Nauert as a good fit for the role because she has a strong understanding of President Trump and is a good communicator.

The Senate will need to confirm Nauert's nomination.