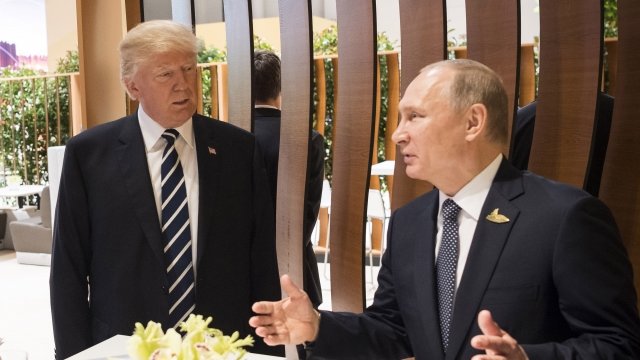 President Trump and Russian President Vladimir Putin will hold a face-to-face meeting next month amid tense relations between the two countries.

President Donald Trump and Russian President Vladimir Putin have both said they want to improve relations between the two countries. Now they'll have a chance to sit down and talk it out together.

National Security Adviser John Bolton traveled to Russia this week to nail down the details of a Trump-Putin summit, which will take place on July 16 in Helsinki, Finland. The two leaders have met on the sidelines of major world summits, but haven't had a direct one-on-one sit-down like this before.

"It's important for the leaders of these two countries to meet. There are a wide range of issues. Despite the differences between us, both President Trump and President Putin think they may be able to find constructive solutions. I'd like to hear someone say that's a bad idea," Bolton said.

There's still plenty of unresolved issues between the U.S. and Russia, from the fighting in Ukraine to alleged tampering with the 2016 U.S. election to a chemical weapons attack in the U.K. Those incidents have prompted the two countries to trade sanctions and diplomatic expulsions.

Neither country has shown signs of budging on these contentious issues. But there are other areas where the two leaders could make progress — like maintaining the decades-old arms control agreements restricting missile deployments.

The Evolution Of Trump's Travel Ban

The Supreme Court upheld Trump's travel ban, which has changed several times since it was first implemented.

Trump's under some pressure to stand up to Russia from U.S. allies in the region. He's also meeting with NATO nations around the same time, and the defense bloc is looking for all its members to present a united front on dealing with Russian aggression.

And the ongoing investigation into Russian interference in the 2016 campaign is likely to cast a pall over the meeting.

Putin's unlikely to give any ground either: he's built up a reputation domestically as a strong leader standing up to Western aggression, and won't want to undermine that image without getting something in return.

Plus Putin can't afford to spend too much time on the summit; his country's in the middle of hosting the World Cup, which has its final game scheduled for July 15.