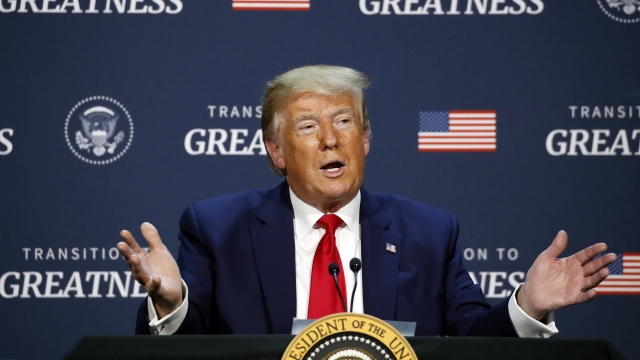 SMS
Pres. Trump To Hold Presidential Nominee Acceptance Speech In Florida
By Caitlin Baldwin
By Caitlin Baldwin
June 12, 2020
President Trump is set to make his acceptance speech in front of a crowd of people in his home state of Florida.
SHOW TRANSCRIPT

President Donald Trump will accept the Republican presidential nomination in Jacksonville, Florida this summer instead of North Carolina.

The Republican Party of Florida said it's "committed to holding a safe, secure and successful event."

The convention will still technically be in North Carolina. Republicans signed a contract to hold their convention in Charlotte, so delegates will still officially nominate the president there. But President Trump will make his acceptance speech in his home state of Florida at the VyStar Veterans Memorial Arena, which holds 15,000 people.

Florida's Democratic Party said it was deeply concerned Republicans were moving the convention to Florida. In a statement, Democratic Party Chair Terrie Rizzo said the decision was made "because Donald Trump wanted to give a speech to a crowd of people not social distancing -- and, given his previous public events, likely not wearing masks. Those are safety protocols set forth by his own administration’s public health experts to prevent the spread of COVID-19."