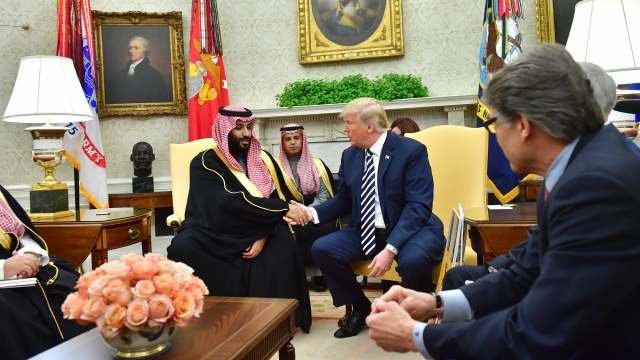 SMS
Trump To Bypass Congress To Sell Weapons To Saudi Arabia, UAE
By Ahmed Jawadi
By Ahmed Jawadi
May 24, 2019
​The Trump administration is invoking an obscure provision of the Arms Export Control Act to bypass congressional review.
SHOW TRANSCRIPT

The Trump administration is preparing to go ahead with the sale of billions of dollars worth of weapons to Saudi Arabia and the United Arab Emirates without Congress' approval.

News first broke out about the administration's plans on Wednesday. Sen. Chris Murphy tweeted that he'd heard President Donald Trump might "use an obscure loophole in the Arms [Export] Control Act" to allow "a major new sale of bombs to Saudi Arabia (the ones they drop in Yemen) in a way that will prevent Congress from objecting." He said that law lets Congress reject sales to foreign countries, but speculated that the president could "claim the sale constitutes an 'emergency,'" in which case he said the sale "would go through automatically."

Ranking Member of the Senate Foreign Relations Committee Bob Menendez confirmed the news in a statement Friday. He said the administration "formally informed Congress that it is invoking an obscure provision of the Arms Export Control Act," but didn't adequately explain why it was doing so. Menendez added that the administration "described years of malign Iranian behavior but failed to identify what actually constitutes an emergency today."

Tensions between the U.S. and Iran started ramping up several weeks ago. The U.S. has accused Iran of mobilizing proxy groups to target American forces in Iraq and Syria, among other things. President Trump told reporters Friday morning "about 1,500 people" would be deployed to the Persian Gulf, despite saying otherwise earlier this month.

In April, the House of Representatives overwhelmingly passed a resolution to end any U.S. military support for the Saudi-led war in Yemen after it had passed in the Senate a month prior. President Trump vetoed it, saying that the resolution was an "unnecessary, dangerous attempt to weaken [his] constitutional authorities."

The war in Yemen has been going on since 2015 and has killed tens of thousands of people.