Trump Seems To Threaten North Korea Not To Cancel Summit 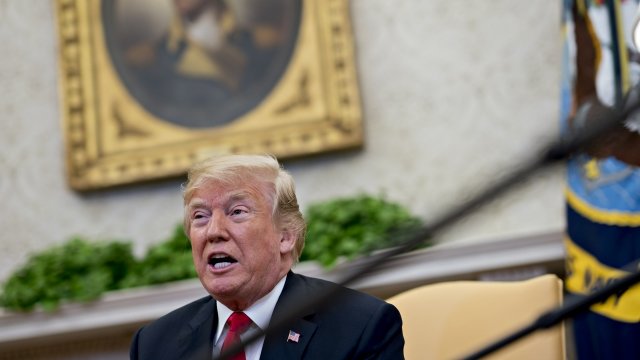 President Trump said the denuclearization of North Korea will be different from what happened in Libya — if the two countries can make a deal.

The fate of the U.S.-North Korea summit is unclear, and on Thursday, President Donald Trump alluded to a harsh outcome for North Korea if Kim Jong-un backs out.

A reporter asked Trump about comparisons between denuclearization in Libya versus North Korea. Trump said the two cases are very different.

"We decimated that country. We never said to [Libyan leader Muammar] Gadhafi, 'Oh, we're going to give you protection. We're going give you military strength.' ... If you look at that model with Gadhafi, that was a total decimation. We went in there to beat him. Now, that model would take place if we don't make a deal, most likely," Trump said.

It's that last part that North Korea could view as threatening, where Trump says what happened in Libya could happen in North Korea if Trump and Kim don't reach an agreement.

We don't have a lot of details on what the U.S. is willing to offer to get North Korea to make a deal. Newsy has previously reported on economic inducements, and security guarantees are apparently on the table, too.

Trump said: "We're willing to do a lot. And he's willing to, I think, do a lot also. And I think we'll actually have a good relationship, assuming we have the meeting, and assuming something comes of it. And he'll get protections that would be very strong."

For now, the summit between Trump and Kim is set for June 12 in Singapore.