Israeli PM Netanyahu's Ties To Trump May Not Win Him Reelection 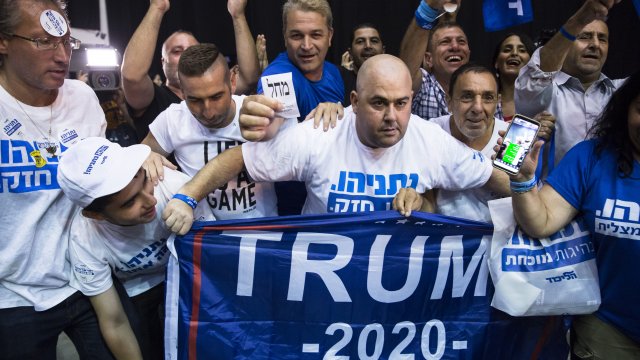 Israeli voters are waiting to hear who their next prime minister will be after heading to the polls for the second time this year.

Current Prime Minister Benjamin Netanyahu's campaign has leaned heavily on his relationship with President Donald Trump, who is popular in Israel despite his low approval rating among American Jews.

The two leaders have maintained an especially strong relationship since President Trump moved the U.S. Embassy in Israel from Tel Aviv to Jerusalem and recognized Israel's sovereignty over the disputed Golan Heights region. Netanyahu also moved to bar Democratic U.S. congresswomen Rashida Tlaib and Ilhan Omar from entering Israel after President Trump encouraged him to do so.

On the day before the election, Netanyahu promised to annex all settlements in the West Bank, a last-ditch effort to get out the vote. He made a series of similar promises throughout his campaign.

Netanyahu has even used tactics similar to President Trump's. The prime minister said on election day that the media was misleading Israelis about right-wing voter turnout. He posted on social media: "The media reports that the voting rates are at an all time high. They don't report that the high voting rates are in the left-Wing! The voting rates in the right-wing - are lower than ever!

He's also employed fear tactics, including saying: "What are you doing, right wing? Get out and vote to avoid a left wing and Arab government!"

Only 49% of eligible Arab voters in Israel cast a ballot back in April, and higher turnout in those communities would likely make it more difficult for Netanyahu to form a coalition.

Netanyahu's Facebook chatbot was disabled for several hours Tuesday after he used it to question users about their votes, violating Israeli election law.

Voters likely won't know the winner until Wednesday afternoon at the earliest.