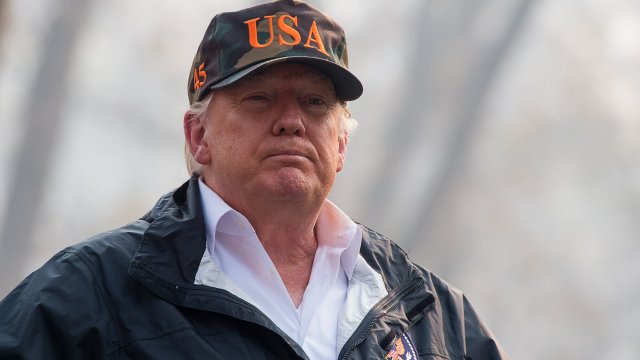 Trump said in a tweet Wednesday that "billions" of dollars are sent to California to help the state recover from wildfires. He claimed the state wouldn't need that money if it had proper forest management, and he threatened to cut funding "unless they get their act together."

Trump has blamed California's forest management for the state's wildfire crisis before.

Back in November, while firefighters were battling huge blazes in Northern and Southern California, Trump said there was no reason for the wildfires "except that forest management is so poor." He threatened to withhold federal funding then, too.

But California officials actually aren't responsible for the vast majority of the state's forests.

Federal agencies own and manage 57 percent of them. Another 40 percent are owned by families, Native American tribes or companies.

And California's most recent fires haven't even started in forests. As The New York Times pointed out, the Camp and Woolsey fires began in the "wildland-urban interface," which is an area of transition between wildland and human development.

A spokesperson for FEMA told the Times in November the agency approved more than $12.7 million in federal funding to help wildfire survivors in several California counties. As of Wednesday afternoon, FEMA had yet to comment on Trump's most recent statement.