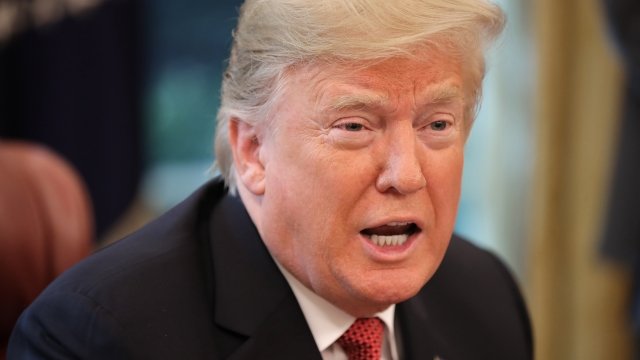 President Donald Trump threatened to close the U.S.-Mexico border as a caravan of thousands of Honduran migrants makes their way toward it.

In a tweet Thursday morning, Trump said, "I must, in the strongest of terms, ask Mexico to stop this onslaught - and if unable to do so I will call up the U.S. Military and CLOSE OUR SOUTHERN BORDER!"

The caravan — which started in Honduras — is estimated to have grown to around 4,000 people. It's nearing the Mexico-Guatemala border.

The Mexican government has reportedly added an additional 500 federal police officers to its border in preparation for the caravan, according to NBC. Mexico says it will process migrants like it normally does: Migrants with passports will be allowed to enter, those without proper documents will have to apply for refugee status. The country warns that any migrant caught entering the country "in an irregular manner" faces deportation.

Trump warned in his tweet he would stop "all payments" to Guatemala, Honduras and El Salvador, a threat he also made earlier this week. Trump says the leaders of those countries "are doing little to stop this large flow of people." Government documents show the U.S. gave a total of nearly $500 million dollars combined to those three countries in the 2017 fiscal year.