Trump, Backed By A Strong Economy, Threatens To Keep Up Trade War 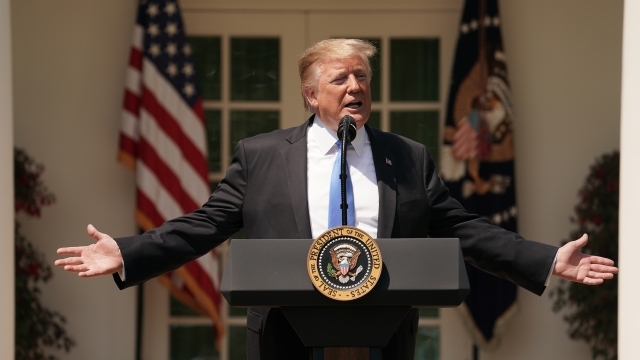 President Trump's threats to escalate the trade war with China come amid a strong U.S. economy and a slowing Chinese economy.

President Trump's latest round of tariff threats against China have sent global markets reeling and jeopardized the prospect of a trade deal between the two countries.

The trade war didn't stop the U.S. economy from posting strong GDP growth last quarter, thanks largely to volatile factors like a reduced trade deficit. The president has credited his tariffs on China for part of that growth.

China, meanwhile, is still working its way out of an economic slowdown. Officials were hoping a new trade deal with the U.S. would inspire renewed confidence in China's market. But the economic disparity might give the U.S. extra leverage in negotiations.

And the White House has made it clear it's not just looking to end the trade war, but to spur significant economic reforms in China. President Trump's tweets suggest he's not happy with the scope of what's on the table now.

President Trump warned he plans to boost tariffs currently placed on $200 billion of Chinese goods from 10% to 25% on Friday.

The last time the president threatened to hike tariffs on China, he ended up settling for a cease-fire with a few token concessions from China.

Negotiators were slated to meet Wednesday to potentially wrap up the last details of a trade deal.