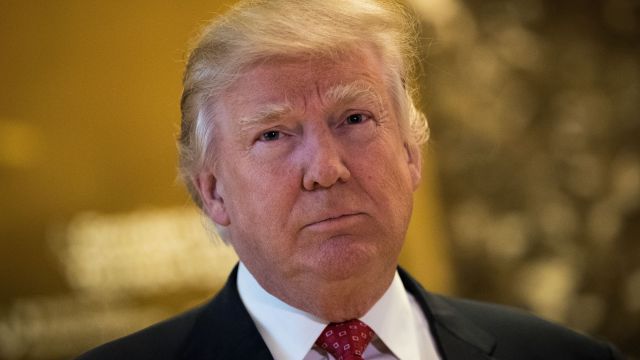 The Trump administration reportedly said the president was committed to a two-state solution between Israel and Palestine.

That would be a departure from Trump's recent talk on Israeli-Palestinian relations.

"Our president has been, I think, the worst thing that has ever happened to Israel," Trump told Fox News' Sean Hannity in March.

In December, the U.S. didn't stop a U.N. resolution condemning Israeli settlements while pointing out the damage settlements would do to a peaceful two-state solution. That angered Israel, and Trump didn't pass up the opportunity to chime in.

Before taking office, Trump tweeted, "We cannot continue to let Israel be treated with such total disdain and disrespect." He suggested things would change once he became president.

But Thursday, a White House statement rang a different tone. Press secretary Sean Spicer said, "While we don't believe the existence of settlements is an impediment to peace, the construction of new settlements or the expansion of existing settlements ... may not be helpful in achieving that goal."

With Israel pushing for more settlements in East Jerusalem, this might not be the kind of Trump administration the Israeli government was hoping for. Trump and Israeli Prime Minister Benjamin Netanyahu are set to meet Feb. 15.

In the first few days of Trump's presidency, the administration said it was in the early stages of plans to move the U.S. Embassy in Israel to Jerusalem — a sign of an easy relationship for Netanyahu. This just might come up.