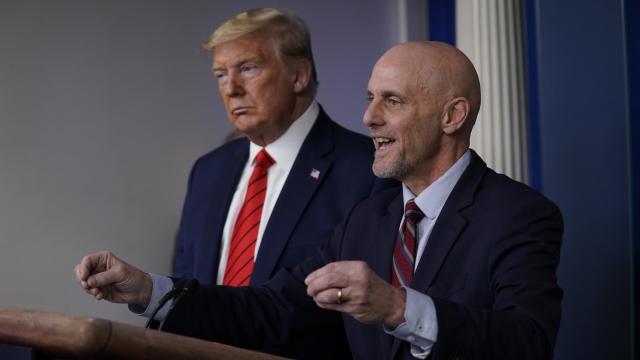 The president said he has instructed the FDA to look into whether chloroquine is effective in treating the coronavirus.

During a press briefing Thursday, President Donald Trump said he told the FDA to look into whether a decadesold anti-malarial drug can be used to treat the coronavirus.

The drug in question is called chloroquine. Some scientists have suggested it could be used to treat the coronavirus. It'll undergo a clinical trial to see if it's effective.

"That's a drug that the president has directed us to take a closer look at as to whether an expanded use approach to that could be done to actually see if that benefits patients," FDA Commissioner Stephen Hahn said.

But Hahn also said it's important to "not provide false hope."

The World Health Organization has said there's no proof yet that the drug can treat the virus.

On Thursday, Bayer, a pharmaceutical company, said it's donating 3 million tablets of Resochin, made out of chloroquine phosphate, to government agencies to potentially treat COVID-19. Resochin is used to treat malaria and autoimmune diseases. The drug has not been approved in the U.S., but the company said it's working with "appropriate agencies on an Emergency Use Authorization."

Other drugs are also being tested around the world. Remdesivir, an antiviral drug, is under clinical trials in the U.S. and China.

And scientists are also working on a vaccine. The National Institutes of Health announced Monday a phase one clinical trial for a potential vaccine has begun and that the first participant has received it. Different doses will be tested on 45 healthy adult volunteers. But public health officials have said getting a vaccine ready for widespread use could take up to 18 months.