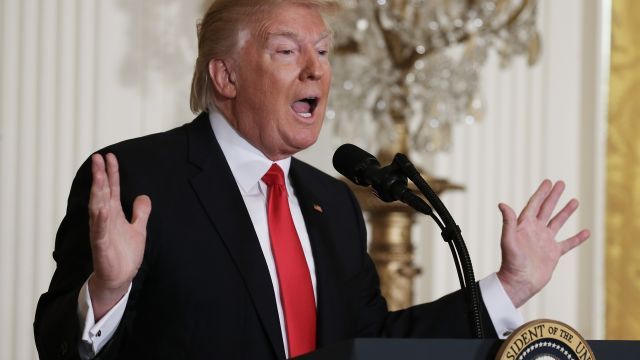 SMS
Trump Tears Into The Media During Hourlong Press Conference
By Matt Picht
By Matt Picht
February 16, 2017
During a combative press conference, Trump accused the media of fabricating stories about his ties to Russia.
SHOW TRANSCRIPT

President Trump came to Thursday's press conference with a bone to pick with the media.

During the hourlong press conference, Trump accused the media of falsifying a link between his campaign and Russia, improperly reporting leaked information and just generally covering his presidency unfairly.

The attacks provoked a pretty strong pushback from some journalists.

NBC's Peter Alexander said, "The question that we wanted to get from him was, if you're providing misinformation about small things like the Electoral College margin, why should Americans trust you about big things, as well?"

And CNN's Jake Tapper said, "You're the president. You legitimately won the presidency. Now get to work, and stop whining about it."

The Trump administration's relationship with the media has so far been contentious to the point of parody. 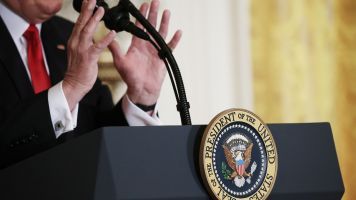 President Trump Gets A Live Fact-Check During Press Briefing

But recent press coverage of leaked information actually had a tangible effect on the Trump administration. It helped force retired Gen. Michael Flynn from his job as national security adviser.

That could explain why Trump's so determined to stick it to the media.

Trump told reporters, "Tomorrow, they will say, 'Donald Trump rants and raves at the press.' I'm not ranting and raving. I'm just telling you: You're dishonest people."