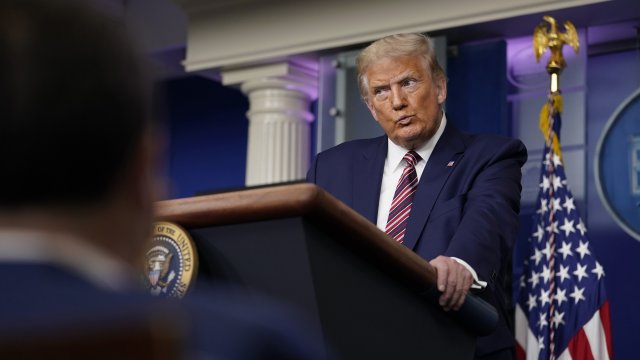 President Trump is hitting back against a New York Times report claiming he paid just $750 in federal income taxes in 2016 and 2017.

“Fake news. It's totally fake news made up, fake,” Trump said at a press conference.

The report — out just days before the first presidential debate — also says the president paid no income taxes at all in 10 of the past 15 years. It highlights questionable deduction tactics, like writing off $70,000 to have his hair done during his reality television show, “The Apprentice.”

“I would love to see more. I think it raises more questions than answers,” said Lydia Desnoyers, founder of Desnoyers CPA, LLC.

Unlike his predecessors, President Trump has refused to release his tax returns. He also waged a legal battle to keep them hidden. After the report came out, he did say he would eventually release them — but didn’t say when.

The Times report has also cast a spotlight on an IRS audit into a $72.9 million tax refund he received — which could result in a steep penalty for gross negligence.

“For it to go to that criminal threshold, you have to be able to show intent,” Desnoyers said.

It’s likely to be mentioned during Tuesday’s debate, with the economy being one of the night’s main topics.