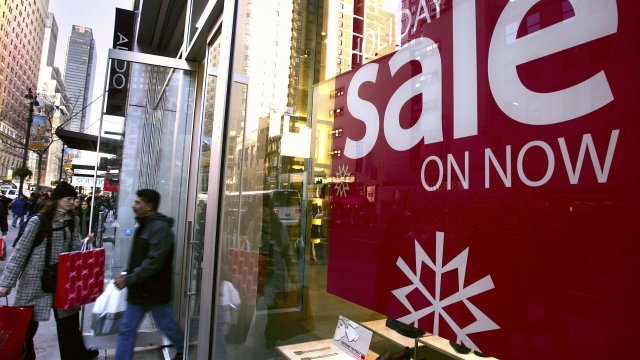 U.S. retailers still anticipate a good haul from the holiday shopping season this year, in spite of the Trump administration's tariffs on China.

The White House's most recent round of China tariffs, imposed on Sept. 1, targeted consumer goods like clothing, footwear and some electronics. And of US imports of those products, over 1/3 came from China in 2018. Those goods are now facing a 10 percent price hike.

But the trade war hasn't dampened optimism for retailers: the National Retail Foundation expects retail sales to grow by around 4 percent this year, a little higher than past seasons. A Gallup poll notes Americans plan to spend more on Christmas gifts on average this year than they have in recent years.

It's partly by design that tariffs aren't showing up in time to ruin the holidays. President Trump delayed the bulk of planned tariffs that would have hit consumer goods until Dec. 15. Most importers have already stocked up for the holidays by that date.

Tariffs may not be biting hard on retailers just yet, but they are still putting pressure on the U.S. economy. One survey found more than half of the small businesses affected by tariffs plan to raise their prices.

And the trade war's uncertainty poses a global threat as well: The International Monetary Fund says the U.S.-China trade war could drag global growth down to its lowest point since the 2008-2009 financial crisis.