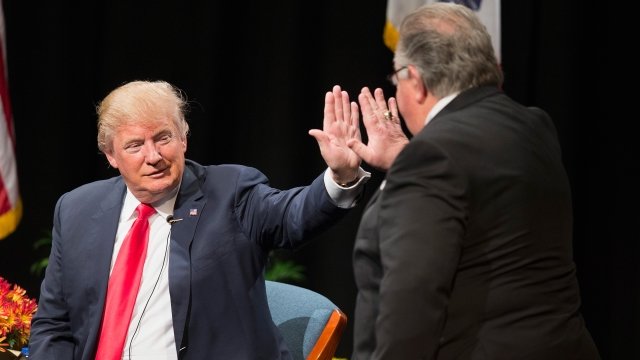 SMS
Trump Taps Former Talk Show Host To Be USDA's Lead Scientist
By Grant Suneson
By Grant Suneson
July 22, 2017
Trump nominated Sam Clovis to be the lead scientist of the Department of Agriculture, even though he has no agricultural experience.
SHOW TRANSCRIPT

Six months into his term, President Donald Trump is still filling out his Cabinet. And some are questioning one of his latest picks' qualifications.

Clovis also served as Rick Perry's campaign chairman. After Perry dropped out of the 2016 election, Clovis served as an adviser to the Trump campaign and the Trump White House.

But Clovis doesn't have any agricultural experience, which might disqualify him from being the lead scientist at the U.S. Department of Agriculture.

A 2008 law says the undersecretary should be picked "from among distinguished scientists with specialized training or significant experience in agricultural research, education, and economics."

Clovis was an economics professor, and the White House touted his military experience. But he doesn't seem to fit the bill of a distinguished scientist with significant agricultural experience.

The Union of Concerned Scientists took issue with the nomination. It said Clovis was "an unacceptable and illegal choice for this important role."

It also questioned Clovis' scientific acumen — he has doubted climate change in the past, calling some of the studies that suggest human activity are causing Earth to heat up "junk science."

Those concerns could lead to resistance in Clovis' Senate hearing. But that's been a familiar theme as the Trump administration has struggled to fill important roles within the government.

There are 570 key positions that need to be approved by the Senate. As of July 21, The Washington Post found more than 350 had no nominee and only 49 had been confirmed.