Trump Chooses A Romney — But Not Mitt — To Head RNC 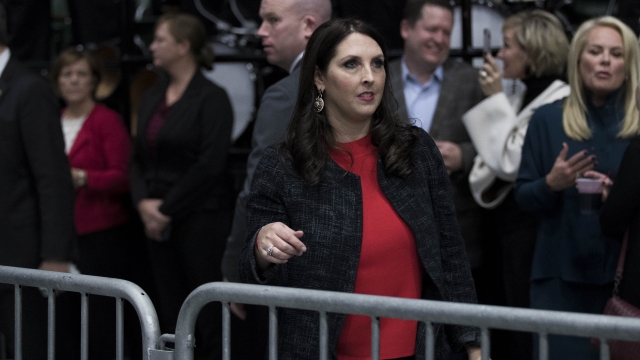 SMS
Trump Chooses A Romney — But Not Mitt — To Head RNC

Former Massachusetts Gov. Mitt Romney might not have gotten a job offer from President-elect Donald Trump, but it looks like his niece has.

According to a statement released Wednesday, Trump has chosen Ronna Romney McDaniel to head the Republican National Committee beginning in 2017.

McDaniel will serve as deputy chair until current chairman Reince Priebus transitions to his role as Trump's chief of staff.

McDaniel has served as Michigan's Republican Party chair since 2015. Under her leadership, Trump won Michigan — the first time the state voted for a Republican presidential nominee since 1988.

McDaniel was a fairly early and loyal supporter of Trump. After Trump won the Michigan primary, she said she would pledge her RNC delegate vote to him. McDaniel also served as chair of the Michigan delegation at the 2016 GOP convention.

SEE MORE: Changes Could Be Coming For The White House Press Corps

Bob Paduchik, who ran Trump's campaign in Ohio, has been tapped for the role of deputy co-chair.

Members of the RNC's executive committee will need to approve both appointments, though they are expected to do so. Typically, they respect the president or president-elect's choice to lead the party.