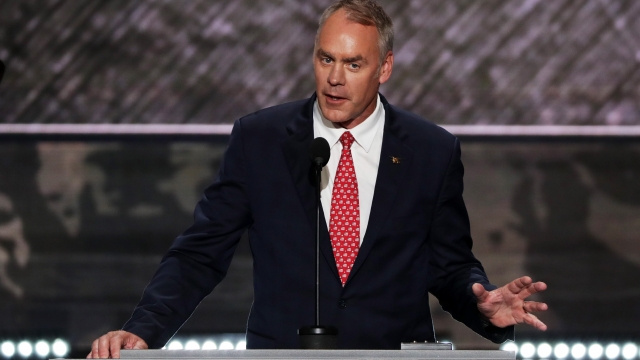 President-elect Donald Trump has tapped GOP Rep. Ryan Zinke to lead the Department of the Interior.

Zinke, who is Montana's only member of the U.S. House of Representatives, sits on the House Natural Resources Committee. He is wrapping up his first term in Congress.

SEE MORE: No Drilling Allowed In The Arctic Sea — At Least For A Few Years

Zinke was re-elected for a second term in November.

Before he was elected to Congress in 2014, Zinke served 23 years as a Navy SEAL, climbing to the rank of commander.  He was also a state senator.

If confirmed by the Senate, Zinke would oversee federal land management. That includes running national parks, leasing land and offshore sites for fossil fuel and renewable energy production and working with tribal nations.

During the campaign, Trump called for opening more federal land and water for oil and natural gas production and lifting the moratorium on coal mining leases. He also said he would review and eliminate many of the regulations imposed during the Obama administration.

Zinke has described himself as an avid outdoorsman. He has advocated for maintaining public access to federal land. He even split with his party on transferring public land to the states.

Zinke made news during a 2014 congressional debate for saying climate change is "not a hoax, but it's not proven science either." According to the Bozeman Daily Chronicle, Zinke later said, "Something is going on. And so I think you need to be prudent, but it doesn't mean you need to be destructive on fossil fuels."

Trump's pick doesn't come as much of a surprise. The president-elect has mostly nominated people for his Cabinet who were loyal to him during the campaign. Zinke endorsed Trump in May.