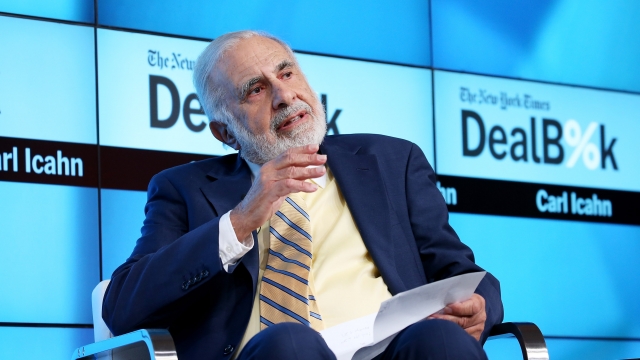 "With business today, the problem is that you are completely strangled by too many regulations done by people that have no understanding whatsoever of business and the ramifications of it," Carl Icahn told Fox Business in November.

The billionaire investor won't have to worry about that much longer, because he will have a say in those regulations.

On Wednesday, President-elect Donald Trump announced he's tapped his friend to be his special adviser on regulatory reform.

Shortly after Trump announced his candidacy, he named Icahn as someone he'd potentially pick for secretary of the treasury.

Icahn later said he would never "be secretary of anything in Washington."

Icahn, who is reportedly worth $16.5 billion, is an activist investor.

That means he buys large stakes in companies and uses his influence as a major shareholder to push for changes.

Icahn was an early supporter of Trump and repeatedly called for regulatory reform. He said in a statement Wednesday, "It's time to break free of excessive regulation and let our entrepreneurs do what they do best: create jobs and support communities."

In a statement, Trump said Icahn's "help on the strangling regulations that our country is faced with will be invaluable."

The role is an informal one. According to Trump's transition team, Icahn won't be a federal or special government employee, and he "will not have any specific duties." That also means he won't be subject to conflict-of-interest rules.

According to The Wall Street Journal, Icahn has played a significant role in vetting people for various Cabinet positions, including who will head the Environmental Protection Agency.

Icahn owns an oil refinery and has been critical of EPA regulations. Trump ended up nominating Oklahoma Attorney General Scott Pruitt to head the agency. Pruitt has sued the EPA over various regulations. Icahn applauded the choice.