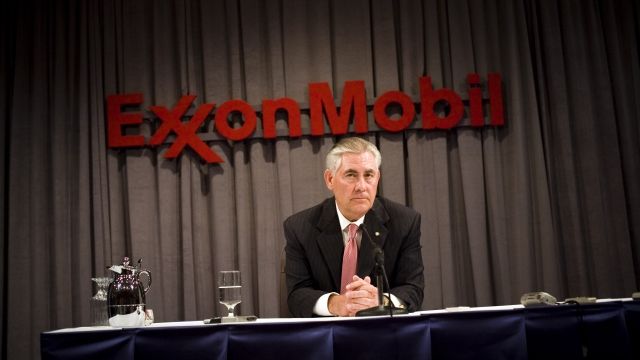 SMS
Trump Appoints Exxon Mobil CEO Rex Tillerson As Secretary Of State
By Grant Suneson
By Grant Suneson
December 13, 2016
Tillerson has no government or diplomatic experience, but he has a lot to gain from changes to State Department policy.
SHOW TRANSCRIPT

Tillerson has no government or diplomatic experience, but he has a lot to gain from changes to State Department policy.

In 2011, he negotiated an energy deal with Russia that reportedly could someday be worth up to half a trillion dollars. Yes, trillion with a "T."

Exxon had to call off an Arctic Sea drilling deal in 2014 after Russia was sanctioned for annexing Crimea. Based on what Trump said during the campaign, all signs point to those sanctions going away under his administration.

Senate Democrats hinted Tillerson's confirmation hearing could turn into a referendum on climate change. He could face questions, under oath, about whether Exxon knew about the role fossil fuels play in disrupting the climate.