Trump Stumps For Pennsylvania GOP Candidate — And Himself 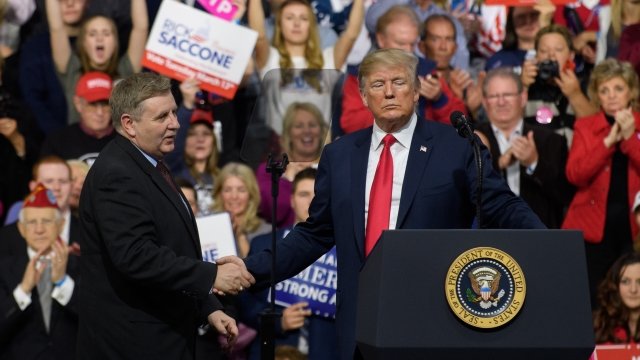 President Donald Trump went to Pennsylvania on Saturday to stump for Rick Saccone, a Republican running for the state's 18th congressional district seat.

And he did just that — for a bit. But it wasn't long before the president shifted gears and turned the speech into something closer to a Trump rally.

The president called for the death penalty for drug dealers, leveled insults against politicians and journalists, touted his progress on North Korea and looked ahead to his 2020 campaign.

"But our new slogan, when we start running in — can you believe it — two years from now is going to be 'Keep America Great,' exclamation point," Trump told supporters in Pennsylvania.

"I would love Oprah to win. I would love to beat Oprah. I know her weakness," Trump told the crowd.

But a rally where Saccone gets more closely associated with Trump and his policies may not have been a bad idea — Trump won the district by double digits in the 2016 election.