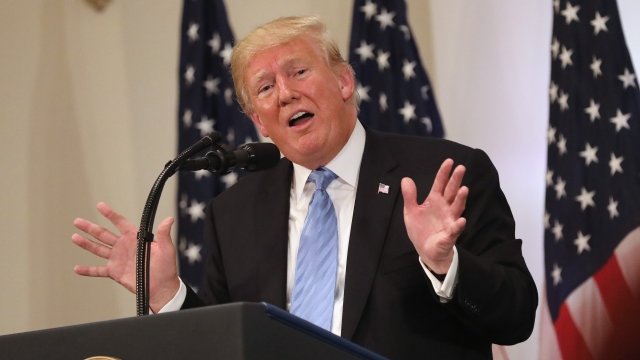 SMS
President Trump Gives Rare Solo Press Conference
By Audrey Esther
By Audrey Esther
September 26, 2018
For nearly an hour and a half, Trump spoke about a variety of issues.
SHOW TRANSCRIPT

The media had a lot of questions for President Donald Trump during a rare solo press conference Wednesday at the United Nations General Assembly.

For nearly an hour and a half, Trump spoke about a variety of issues, including canceling a meeting with Canadian Prime Minister Justin Trudeau over NAFTA negotiations, having evidence of China interfering in the upcoming U.S. midterm elections, and possibly firing Deputy Attorney General Rod Rosenstein.

Trump added he might also delay his meeting on Thursday with Rosenstein.

“Because I don't want to do anything that gets in the way of this very important Supreme Court pick,” Trump said.

That would be Brett Kavanaugh, who will testify Thursday morning before the Senate Judiciary Committee about sexual assault allegations made against him — allegations that both Kavanaugh and Trump allege are politically motivated.

Trump says it's possible what's said during Thursday's hearing may change his mind about the allegations against Kavanaugh.