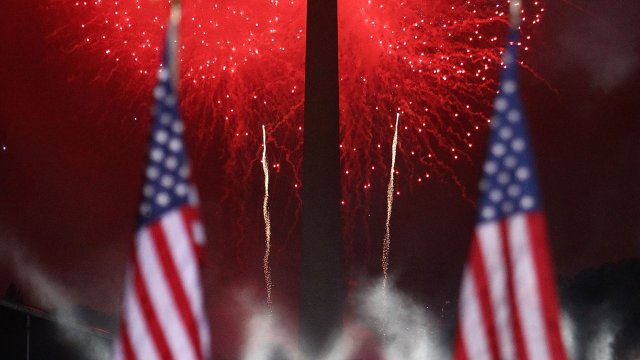 SMS
Trump Details Elaborate 'Salute To America' Fourth Of July Event
By Briana Koeneman
By Briana Koeneman
July 2, 2019
The president told reporters the plans include a speech at the Lincoln Memorial, a flyover by fighter jets and a stationary display of tanks.
SHOW TRANSCRIPT

"We're going to have a great Fourth of July in Washington, D.C. It will be like no other. It will be special," President Trump said.

President Donald Trump has some big plans for this year's Fourth of July celebration in Washington.

The president told reporters in the Oval Office Monday those plans include a speech at the Lincoln Memorial, a flyover by fighter jets and a stationary display of tanks and other military vehicles.

President Trump and his aides are labeling the event as a salute to America and the military. But critics argue the festivities could do more harm than good.

A defense official told The Wall Street Journal tanks would likely damage D.C.'s asphalt streets. And, according to The Washington Post, the National Park Service is worried the damage will continue once the heavy vehicles are stationed at the Lincoln Memorial.

The potential cost of these military displays is another concern. The Defense Department hasn't released any numbers, but estimates put the price tag well into the millions.

And some are worried the events will turn a traditionally nonpartisan celebration into a political one. Previous presidents have limited their Fourth of July festivities to a party on the White House's South Lawn.

President Trump has been itching to put on a military parade ever since he spent Bastille Day in France in 2017. But concerns about the cost and logistics put the idea on the back burner.