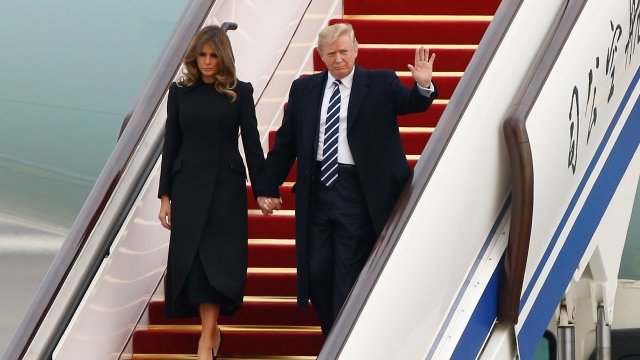 In a speech at the Asia-Pacific Economic Cooperation summit in Vietnam on Friday, President Donald Trump let other world leaders know he's not backing down on his trade demands.

"From this day forward, we will compete on a fair and equal basis," Trump said. "We are not going to let the United States be taken advantage of anymore. I am always going to put America first — the same way that I expect all of you in this room to put your countries first."

If that sounds familiar, it's because Trump commended China for doing that exact thing Thursday in Beijing.

"After all, who can blame a country for being able to take advantage of another country for the benefit of its citizens?" Trump told business leaders Thursday. "I give China great credit."

And just like in his speech in China, Trump criticized past American administrations for trade imbalances that he says have hurt the U.S. 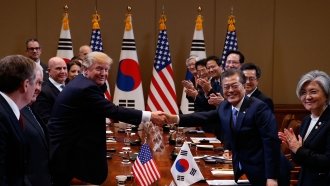 You Can Probably Guess What Trump Talked About In South Korea

The president said from now on he'll enter into "bilateral trade agreements" — not multi-national ones that "tie our hands, surrender our sovereignty, and make meaningful enforcement practically impossible."

It was an interesting point to make in a room of leaders part of the Trans-Pacific Partnership, which the U.S. brokered during the Obama administration. Trump withdrew the U.S. from the trade accord soon after taking office, but other countries involved are reportedly considering moving ahead with some form of the deal.

Trump's tour of Asia is winding down. His last stop after Vietnam is the Philippines.