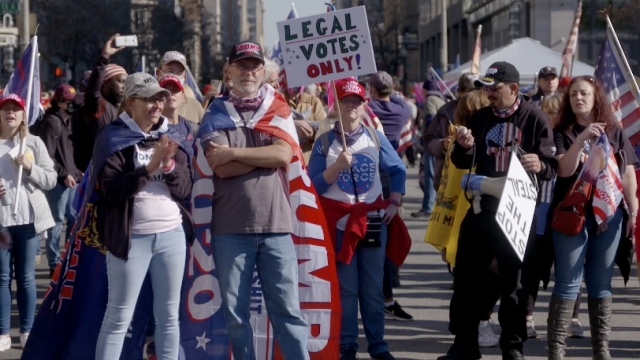 President Trump’s most fervent supporters gathered in the nation’s capital on Saturday.

"I love Trump. I think he’s the best president we’ve ever seen in my lifetime for sure," a Trump support told Newsy.

Dubbed the Million MAGA March, the event instead drew thousands: young and old, families as well as members of far right groups like the Proud Boys. Most demonstrators weren’t wearing masks in the worsening pandemic.

But they shared a single message:

Marching from Freedom Plaza to the U.S. Supreme Court, protesters contested the results of the election. That’s after days of the president claiming without proof that the election was being undermined.

"I want the United States citizens’ vote to count. I don’t want any fraud," a Trump voter said.

"We’re not gonna burn the cities down, we’re not gonna riot, we’re just gonna take what it is. We’ll just have to accept it," a protester said.

Others were less sure.

"I will support the legal president of the United States, I don’t think it’ll ever be Biden," said another.

As Biden urged action Friday to stem the surging coronavirus, Trump tweeted that plans for rallies were “heartwarming.” The president waved at supporters as his motorcade drove by  Saturday morning, headed to his golf club in Virginia.

A clash broke out hours later between his fans and critics. After the protest ended, there were reports of other skirmishes that the police broke up and multiple arrests.

"Regardless of your issue, if you want to come to Washington, D.C., we’re gonna welcome you with open arms. But the rules are very clear, we’re not gonna allow any violence," Newsham said.

In other parts of Washington, counter-protests with their own message:

They chanted, “(Expletive) MAGA, are you mad!”