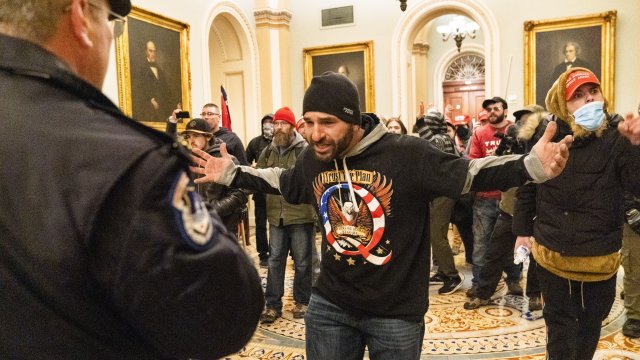 What we’ve seen today has long been the fear of our nation’s top security officials: President Trump’s supporters storming the barricades and entering the nation’s Capitol. Just hours before, President Trump encouraged people to go there, after making more unproven claims of election fraud.

"All of us here today do not want to see our election victory stolen today by emboldened radical left Democrats, which is what they’re doing," President Trump said.

National security officials warned yesterday that they were seeing chatter of a planned breach at the Capitol. Given that concern -- and that warning -- it’s unclear why security was unable to stop demonstrators, and Capitol Police didn’t get back to us.

Violence has been in the backdrop, with multiple arrests and charges ranging from illegal firearm possession to assault. Earlier this week, the head of the far-right group Proud Boys was arrested and charged with destruction of property and possession of two high-capacity firearm magazines. Extremism experts say we could see the group get bigger:

"The support of Trump, the conglomeration of various extremist groups working with groups like the Proud Boys, mean that we have a very active right-wing extremist scene that's going nowhere -- in fact, may become more enraged and grow in the years to come," says Heidi Beirich, co-founder of the Global Project Against Hate and Extremism.

And that goes for another key group in attendance at the rally: followers of QAnon. An ex-believer tells me there's no sign of that stopping, even after a key figure of that conspiracy theory, President Trump himself, leaves the White House.