Trump Supported Reagan — And Carter, Too 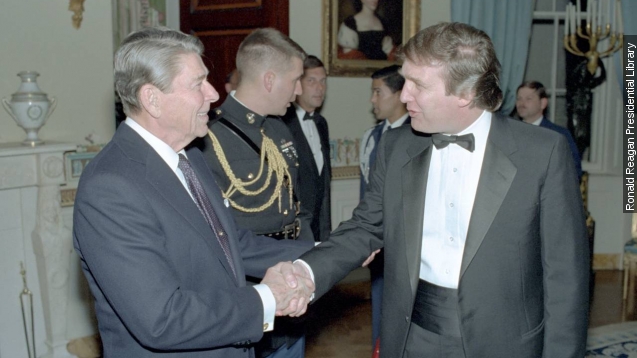 The real estate mogul did support Ronald Reagan, but he might have overstated his relationship with the former president.

Even more than other Republicans, Donald Trump plays up a personal relationship with Ronald Reagan.

"I knew him. I knew him well. He liked me. I liked him," Trump told Fox News.

"As Ronald Reagan changed, I also changed. I also became a Republican," he told CNN.

And there are a few things that link the two. They did meet a couple times.

In Trump's book "The Art of the Deal," he included a photo that, oddly, the president signed "Reagan Reagan."

But records from the Reagan White House show they "mostly kept the real-estate mogul at arm’s length." That's how The Wall Street Journal put it after digging through any reference to Trump from Reagan's staff.

And as much as Trump praises Reagan and knocks Jimmy Carter ...

"Iran they had our hostages. And Jimmy Carter was our president, and it was pathetic," Trump said to Forbes.

Trump actually supported Carter against Reagan in 1979, donating the maximum amount to the Democrat's campaign.

In 1984, Trump made his first donation to Reagan, though that was after he had made a donation to his opponent Walter Mondale.

Reagan and Mondale were just two of the many candidates from both parties in the 1980s who received money from Trump, including Jeb's father, George H.W. Bush.