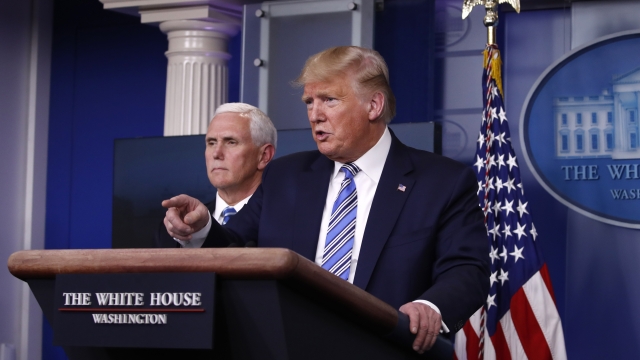 SMS
Trump Suggests Easing Coronavirus Restrictions To Restart Economy
By Katherine Biek
By Katherine Biek
March 24, 2020
"Our country wasn't built to be shut down. This is not a country that was built for this," the president told reporters.
SHOW TRANSCRIPT

As the coronavirus continues to spread, businesses throughout the U.S. have shut down and people have been urged to practice social distancing.

But President Trump said Monday that he's looking into loosening some of those restrictions in order to restart the economy.

"It’s bad and obviously the numbers are going to increase with time, and then they’re going to start to decrease. And we’re going to be opening our country up for business because our country was meant to be open and working with others," President Trump said.

Despite the Federal Reserve cutting interest rates to near zero in an attempt to boost the economy, the U.S. stock market has continued to be volatile. And Treasury Secretary Steven Mnuchin already warned the unemployment rate could rise to 20%.

The president first floated the idea of reopening businesses Sunday night on Twitter, saying he'd make a decision "at the end of the 15 day period." Those 15 days end on March 30.

Some Republicans aren't on board with the president's idea. Sen. Lindsey Graham wrote on social media, "There is no functioning economy unless we control this virus."

U.S. Surgeon General Jerome Adams warned Monday that confirmed cases of the coronavirus will continue to rise, saying, "This week, it's going to get bad." More than 590 Americans have died from the virus so far and more than 46,000 are infected.