Trump Sues Banks To Block Them From Complying With Subpoenas 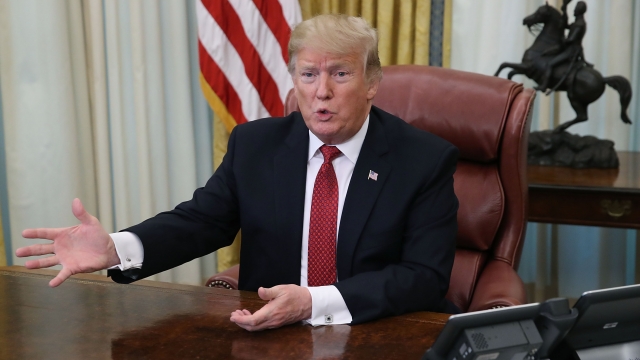 SMS
Trump Sues Banks To Block Them From Complying With Subpoenas
By Katherine Biek
By Katherine Biek
April 30, 2019
The House committees on Intelligence and Financial Services each issued subpoenas to the banks in mid-April.
SHOW TRANSCRIPT

President Donald Trump, his three oldest children and the Trump Organization sued two banks on Monday to prevent them from turning over financial records to congressional committees.

The lawsuit was filed against the president's longtime lender Deutsche Bank and Capital One.

The House committees on Intelligence and Financial Services each issued subpoenas to the banks in mid-April for information on President Trump's finances.

In their complaint, lawyers for the president say the subpoenas are invalid because "they have no legitimate legislative purpose." They allege that the subpoenas were instead "issued to harass" the plaintiffs and "to ferret about for any material that might be used to cause [President Trump] political damage."

That's the same argument President Trump and the Trump Organization made in a separate lawsuit against House Oversight and Reform Committee Chairman Elijah Cummings, who has also issued a subpoena for years of the president's financial records.

House Financial Services Chair Maxine Waters and House Intelligence Chair Adam Schiff, who were not named as defendants in Monday's lawsuit, responded to it in a joint statement, calling it "meritless."

According to the lawsuit, both Deutsche Bank and Capital One intend to comply with the subpoenas unless the court intervenes.