Despite Pushback, Trump Won't Rule Out Romney For Secretary Of State 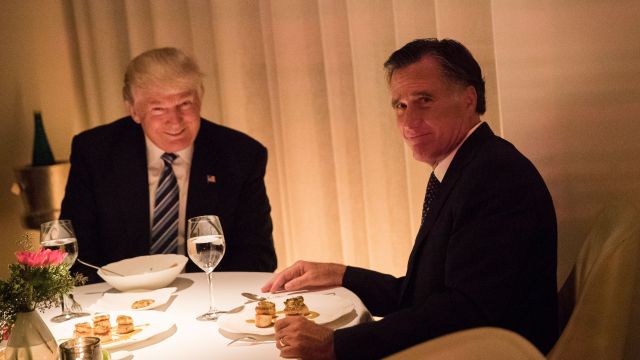 SMS
Despite Pushback, Trump Won't Rule Out Romney For Secretary Of State
By Lauren Stephenson
By Lauren Stephenson
December 7, 2016
Mitt Romney was one of Donald Trump's fiercest GOP critics on the campaign trail — if he's secretary of state, some Trump supporters won't be happy.
SHOW TRANSCRIPT

"Let me go back to Mitt Romney. Is he still under consideration?" NBC's "Today" show host Matt Lauer asked on Wednesday.

"Does he have a chance to become secretary of state?" Lauer asked.

But after his dinner with Trump last month, Romney told reporters, "President-elect Trump is the very man who can lead us to that better future."

Trump may have moved on from the campaign, but some of his advisers still aren't sold on the idea of Romney being tapped for secretary of state.

For example, one apparently responded to a reporter's question about Romney with the sleeping emoji.

Others have spoken publicly about their concerns with the potential selection — namely, upsetting Trump's base.

"The number of people who feel betrayed to think that a Gov. Romney would get the most prominent Cabinet post after he went so far out of his way to hurt Donald Trump," Trump's campaign manager Kellyanne Conway told CNN's "State of the Union."

There are plenty of other choices on the table, including former New York City Mayor Rudy Giuliani, former U.S. Ambassador to the U.N. John Bolton, retired Gen. David Petraeus and former governor and Ambassador to China Jon Huntsman.

However, according to U.S. News and World Report, Trump's aides would only confirm Giuliani and Romney were being considered for the secretary of state post.

But Romney could help Trump build a bridge with the establishment.

Of the potential choices, Romney and Huntsman are the least likely to face intense opposition from Democrats.