Trump Repeats Claims That Both Sides Are To Blame For Charlottesville 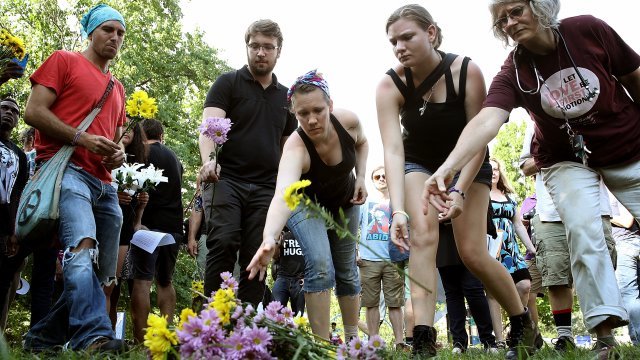 President Trump is still sticking by his comments that both sides were to blame for deadly violence at a white nationalist rally in Charlottesville, Virginia.

He defended his earlier statements after meeting with Sen. Tim Scott, who is currently the only black Republican senator. Scott was invited to the White House on Wednesday to discuss Trump's Charlottesville response as well as issues impacting minority communities.

Scott previously questioned Trump's "moral authority" over his Charlottesville statements. Trump equated the white nationalist demonstrators to the anti-fascist, anti-government group antifa, which marched against them.

Antifa originated in Europe during the 1930s to combat the rise of fascism. Their tactics can include brute force, property destruction and violence.

Scott agrees with the president that antifa "is bad and should be condemned." But he told Trump the group isn't comparable to "hate groups who over three centuries of this country's history have made it their mission to create upheaval in minority communities."

Trump seemed pleased by his discussion with Scott, but not convinced. He told reporters: "We had a great talk yesterday. I think especially in light of the advent of Antifa, if you look at what's going on there. You have some pretty bad dudes on the other side also, and essentially that's what I said."

Scott responded, saying, "Rome wasn't built in a day" but said Trump seemed to understand the points he was making and he was "encouraged."