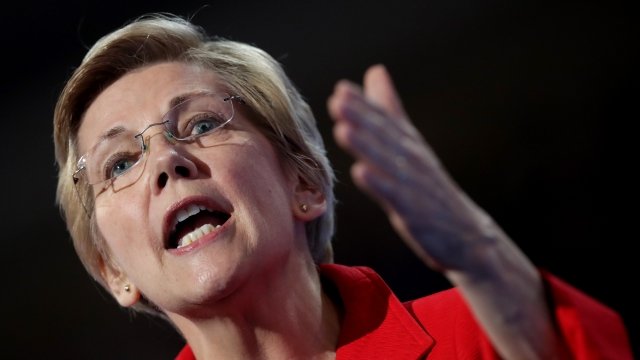 SMS
Trump Slams Sen. Elizabeth Warren Over 'Bogus' DNA Test
By Briana Koeneman
By Briana Koeneman
October 16, 2018
In a series of tweets, Trump called the DNA test "bogus," referred to Warren as "Pocahontas" and criticized her as "a complete and total Fraud."
SHOW TRANSCRIPT

President Donald Trump is slamming Sen. Elizabeth Warren after she took a DNA test to prove her Native American ancestry.

In a series of tweets Tuesday, Trump called the DNA test "bogus," referred to Warren as "Pocahontas" and criticized her as "a complete and total Fraud."

On Monday, Warren's Senate campaign released the results of a DNA test which suggests she has a Native American ancestor about 6 to 10 generations back.

The test was meant to settle a longstanding dispute between Trump and Warren over her heritage. In the 80's, she told her bosses her family tree included Native Americans, and said she grew up hearing family stories that she had Native American ancestors.

But Trump wasn't the only one who criticized Warren about the test.

Warren later responded to the statement on Twitter, saying, "DNA & family history has nothing to do with tribal affiliation or citizenship, which is determined only — only — by Tribal Nations."