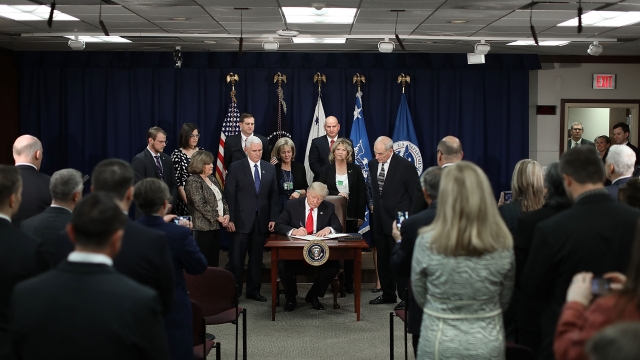 "Beginning today, the United States of America gets back control of its borders, gets back its borders," Trump said during a speech at the Department of Homeland Security.

The first executive order addresses immigration enforcement and calls for the "immediate construction of a physical wall on the southern border." It also calls for the hiring of 5,000 new Border Patrol agents.

As for who pays for the wall — the order calls for federal funds to be used to plan, design and build the border wall. But it also instructs all departments to compile a list of financial aid previously given to Mexico. That would presumably identify which funds could be cut off.

"There are a lot of funding mechanisms that can be used. At this point, his goal was to get the project started as quickly as possible using existing funds and resources that the department currently has," press secretary Sean Spicer said in Wednesday's daily briefing.

Among the other provisions in the order, a call for expedited decisions on an immigrant's eligibility to stay in the U.S. after being detained. It also calls on the secretary of homeland security to use, and if necessary build, facilities near the Mexican border to detain people who cross the border illegally.

But Trump can't eliminate all federal funds with the stroke of a pen. The Supreme Court has ruled that if the federal government is going to tie receiving grant money to conditions, like following deportation policies, that connection must be explicitly spelled out from the start. So unless the Trump administration clearly spells out a connection between grant money and a requirement to follow federal deportation policies, the White House can't cut off those funds.

The order also prioritizes the deportation of illegal immigrants who have been convicted of any criminal offense or charged with one, even if those charges are still pending. It also ends the Priority Enforcement Program started by President Barack Obama in 2014 and reinstates a program known as Secure Communities.

Both actions Trump signed Wednesday fulfill some promises he made on the campaign trail.