Letter Says Trump Resigned From His Companies Before Taking Office 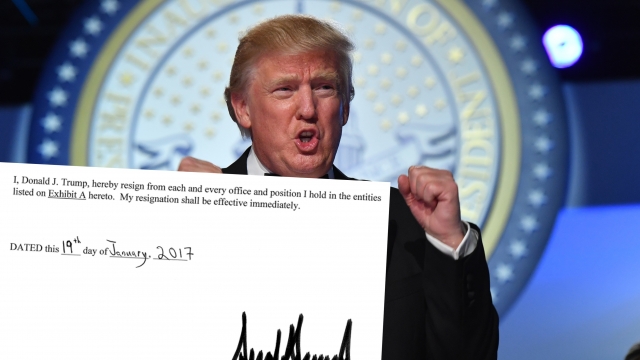 SMS
Letter Says Trump Resigned From His Companies Before Taking Office
By Matt Picht
By Matt Picht
January 23, 2017
The Trump Organization has released the president's letter of resignation from almost 500 companies.
SHOW TRANSCRIPT

The White House insists President Trump has handed his sons Eric and Donald Jr. control of his vast network of businesses, known as the Trump Organization.

Now, the Trump Organization has released some proof: a mass resignation letter from Trump, dated one day before he took office.

CNN, which first received the document, reports the Trump Organization has added an ethics officer and a chief compliance officer to help avoid conflicts of interest.

A private letter is all Trump needs to resign from his companies. But transferring ownership of his biggest companies requires paperwork to be filed in Florida, Delaware and New York.

ProPublica reports Trump has currently filed to step down from at least 14 of his companies in Florida. Officials in New York and Delaware told the outlet they had not received any of the needed paperwork from Trump.

And Trump still hasn't given any evidence that he's divested from his financial stakes in the organization — which still leaves him open to conflicts of interest.