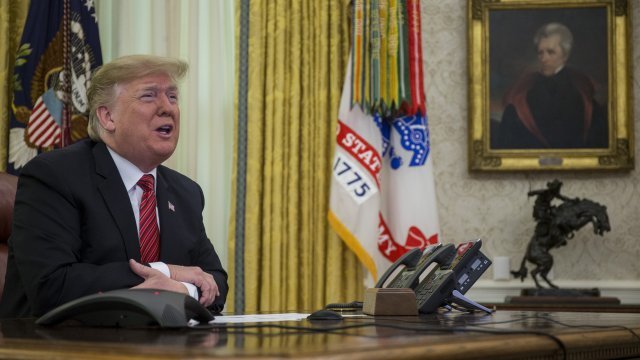 SMS
Trump Says Govt. Shutdown Will Continue Until Border Wall Is Funded
By Audrey Esther
By Audrey Esther
December 25, 2018
On Tuesday, President Trump spoke to reporters about a wide variety of issues including the government shutdown, border funding and human trafficking.
SHOW TRANSCRIPT

After sending Christmas Day greetings and speaking with US troops stationed around the world, President Trump spoke with reporters on Tuesday about a variety of issues.

"Melania and I are truly thrilled to wish every American a very Merry Christmas," President Donald Trump said.

These issues include whether he has confidence in Treasury Secretary Steven Mnuchin.

The President says human trafficking is also becoming enough a problem to justify a wall along the US-Mexico border.

"Human trafficking is one of the hard to believe problems," Trump said, "We can't do it without a wall.”

And ending the partial government shutdown he says is something he won't do until he gets a full $5 billion in funding for the wall—or what he's now also referred to as a barrier and a fence.

"I can tell you it's not going to be open until we have a wall, a fence, whatever they would like to call it. I'll call it whatever they want," Trump said.

Despite not specifying whether it will in fact be a wall, a fence or some other kind of barrier, Trump said that on Monday he "gave out 115 miles worth of wall," to be built somewhere in Texas.

As of Tuesday, the White House hadn't released any additional details about this particular project, but Trump said he plans to be there in January "for the start of construction."