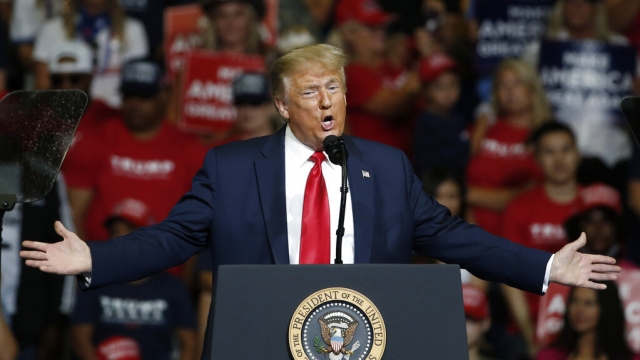 Some 74% of Americans surveyed agreed that President Trump should wear a face mask, including 56% of Republicans.

"It's not often today that you see broad consensus from the American public on anything and so that really stood out to me as something that most Americans can agree on right now," said Mallory Newall, research director for Ipsos.

So far, President Trump has refused to wear a mask in public and has shied away from calling for a national mandate on masks.

"It’s his choice to wear a mask," White House Press Secretary Kayleigh McEneny told reporters at a briefing on Monday. "It’s the personal choice of any individual as to whether to wear a mask or not.  He encourages people to make whatever decision is best for their safety, but he did say to me he has no problem with masks and to do whatever your local jurisdiction requests of you."

The CDC says wearing a mask can greatly reduce transmission of the novel coronavirus. Public health experts warn that by not wearing a mask, President Trump is sending the wrong message.

"This mask is a sign of respect. It's a sign of respect for us caring about one another as protecting one another at this time of a pandemic. And we need for the president of the United States and, frankly, every person to be modeling that caring behavior as this is a time that we're all in this together. For many millions of Americans, President Trump is the most credible messenger. He is the person that they listen to for advice," said Dr. Leana Wen, an emergency physician and former health commissioner for the city of Baltimore.

Public health experts worry that the politicization of face masks may have helped contribute to a new spike in coronavirus cases in Southern states.

And as the crisis grows, the president is increasingly out of step with the public - and with members of his own party.

"We must have no stigma, none, about wearing masks when we leave our homes and come near other people. Wearing simple face coverings is not about protecting ourselves, it is about protecting everyone we encounter," Senate Majority Leader Mitch McConnell said during remarks on the Senate floor on Tuesday.