Local Governments Do The Heavy Lifting In Trump's Infrastructure Plan 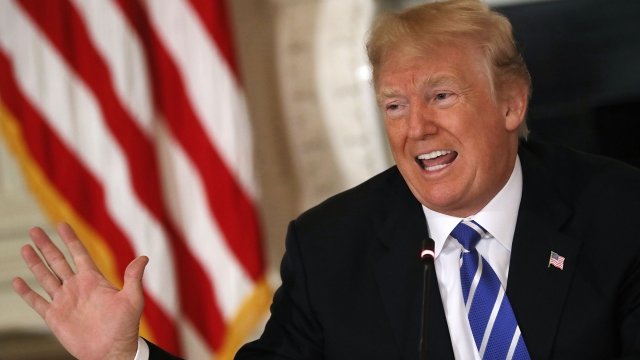 After months and months of false starts, President Donald Trump has released his plan to fix America's "crumbling" infrastructure. It's something he promised to work on going back to the 2016 election cycle.

It's a $1.5 trillion plan that actually doesn't have that many federal dollars in it — just $200 billion of that would come from D.C. over the next 10 years. That would be paid for by cuts in the federal budget without any new revenue streams.

The rest of the $1.3 trillion would mostly come from local and state governments. The responsibility of infrastructure has largely fallen on those two groups already, and the White House has been clear it wants to further that trend even more.

States and local governments are going to have to apply for a cut of the $200 billion federal pie, and the ones that are most likely to get the money are probably those that have already raised some of their own money, possibly by raising taxes.

One of Trump's favorite aspects of the plan seems to be cutting down the amount of time it takes to get a permit to begin building new projects.

Remember: This is just a plan, not legislation. Its next stop is Congress, which will do most of the work negotiating the exact details. But right now, the chances of that happening aren't looking that good.

Ultra-conservative Republicans already don't like the plan's large price tag from the federal government, while Democrats and a lot of infrastructure experts worry the money that would come from D.C. won't be enough to make a long-term impact.