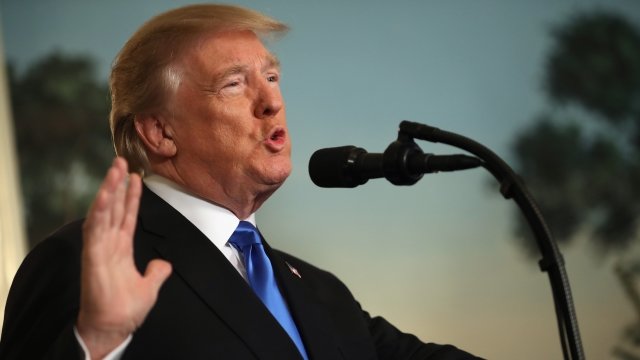 Trump tweeted that Senate Republicans should use the "nuclear option" if the government shutdown continued.

The president tweeted Sunday that Republicans should use the "Nuclear Option" if the stalemate continues.

The nuclear option refers to doing away with a Senate rule requiring 60 votes. Instead, senators would need a simple majority — in this case 51 votes — to pass legislation.

The CDC will retain some of its staff, but limited resources may slow its public health analysis and reports.

A senior Senate Republican told Bloomberg it's possible a deal will be reached Sunday that could fund the government through Feb. 8. As part of that agreement, Democrats would get a vote on the Senate floor to protect young immigrants from deportation.

But on Saturday, some senators told Politico that McConnell wouldn't agree to that.

Even if the Senate passed a spending bill, the House would still need to take it up. And right now, House Speaker Paul Ryan seems pretty adamant that the government needs to be funded until at least Feb. 16.