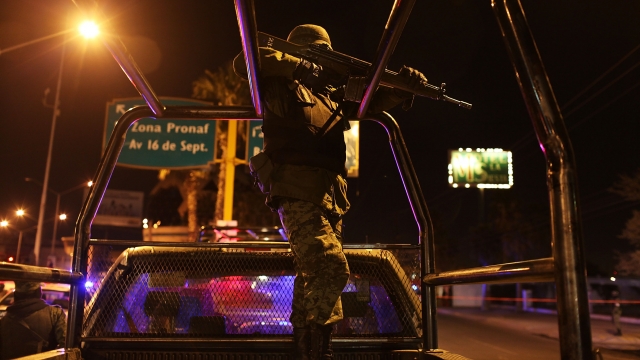 President Trump called for Mexico and the U.S. to wage a war on "drug cartels and wipe them off the face of the Earth."

President Trump says he wants to designate Mexican drug cartels as terrorist organizations. And he declared on Twitter that Mexico, "with the help of the United States," should "wage WAR on the drug cartels and wipe them off the face of the Earth."

Mexico is already familiar with waging war on drug cartels. In 2007, Mexico's then-president Felipe Calderón unleashed battalions of soldiers to fight narco traffickers. The fallout has been devastating: 250,000 people have died amid surging drug violence, with the government crackdown criticized as worsening the situation.

But in an interview this week with former Fox News host Bill O'Reilly, President Trump said he has initiated a process that could label Mexican drug networks as foreign terrorist organizations. He said: "You know, designation is not that easy. You have to go through a process and we're well into that process."

Without elaborating, Trump told O'Reilly that he offered Mexican president Andrés Manuel López Obrador assistance in fighting the cartels, saying he asked him "to let us go in and clean it out."

In response to the interview, López Obrador says he welcomes American cooperation but rejects any intrusion into Mexico. He said: "We don't accept that. Our problems will be solved by Mexicans. We don't want any interference from any foreign country."

But López Obrador is trying to move Mexico away from a military campaign against drug networks. He calls for addressing root causes of violence in Mexico by curbing poverty and creating jobs while combating drug addiction.