Trump Says US Will Halt 'War Games' With South Korea 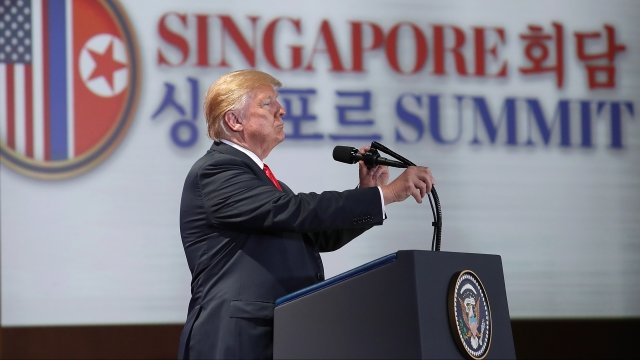 SMS
Trump Says US Will Halt 'War Games' With South Korea
By Katherine Biek
By Katherine Biek
June 12, 2018
He made the announcement after he'd met with North Korea's leader for a historic summit.
SHOW TRANSCRIPT

President Donald Trump announced he will halt joint military drills between the U.S. and South Korea.

He made the announcement at a news conference held in Singapore Tuesday. Earlier in the day, he'd met for a historic summit with North Korean leader Kim Jong-un. Those unprecedented talks ended with Kim recommitting to "complete denuclearization" and Trump pledging "security guarantees" to North Korea.

The U.S. and South Korea carry out joint military exercises annually. But North Korea's not a big fan of the drills, citing them as a reason it needs to have a nuclear arsenal.

"We will be stopping the war games, which will save us a tremendous amount of money, unless and until we see the future negotiation is not going along like it should," Trump said Tuesday.

There are currently about 28,000 U.S. troops stationed in South Korea, and their main mission is to act as a deterrent instead of engaging in combat. Trump told reporters on Tuesday that those troops will remain there for the time being.

Although it's still not clear what steps will be taken to achieve denuclearization, Trump said Kim told him that North Korea is "already destroying a major missile engine testing site."

Trump said U.S. sanctions on North Korea will remain in place until its nuclear weapons "are no longer a factor."