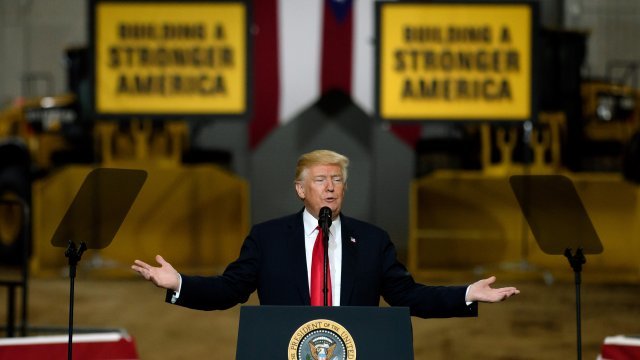 Military and diplomatic leaders have planned for a long-term U.S. presence in Syria to prevent a return of ISIS as well as to stabilize the region.

President Donald Trump caused a stir among military officials when he told a crowd U.S. troops would come home from Syria "very soon."

Military and diplomatic leaders have been planning for a long-term U.S. presence in Syria, both to prevent a return of ISIS as well as to help stabilize the region.

Trump's comments also turned heads because he seemed to have done two things he repeatedly criticized President Barack Obama for: telegraphing military operations before they happened and pulling out of a war zone before the fight was entirely over.

The Syrian civil war, which started in 2011, has grown to include border skirmishes between Kurds and Turkey, Iranian proxy fighters and Russian war planes.

Before he was fired by the president, former Secretary of State Rex Tillerson outlined what many believed to be the administration's policy on Syria. He pointed to the U.S. withdrawal from Iraq in 2011, which he said allowed al-Qaeda "to survive and eventually morph into ISIS."

Defense Secretary Jim Mattis has a similar view on Syria, saying a premature withdrawal would give ISIS a chance to "reestablish local control of territory."