Trump: China and US Want A Trade Deal They Can Both 'Be Proud Of' 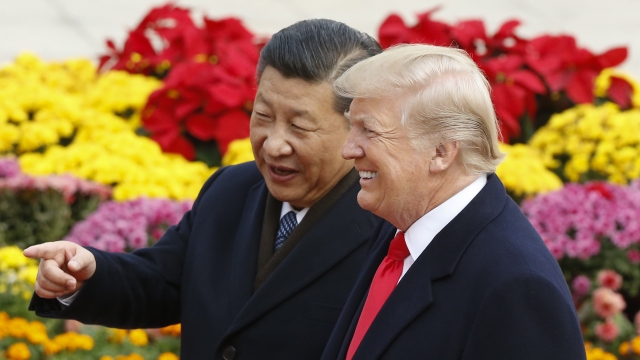 President Donald Trump has threatened to increase tariffs on $200 billion in Chinese imports, but said he's hopeful the two sides will reach a deal by his March 1 deadline. He met with top negotiators from China Thursday to discuss trade relations as he prepares for his meeting with China's president.

President Trump tweeted the "meetings are going well." He said China does not want an increase in tariffs and "feels they will do much better if they make a deal." This comes after both counties put tariffs on each other's goods just last year.

President Trump met with Vice Premier Liu He and his team Thursday afternoon. Afterward, the president told reporters they discussed "every aspect of trade," including China potentially making a massive soybean purchase. He also said China has agreed to criminalize the sale of fentanyl, which he believes would stop the narcotic from coming into the U.S. President Trump also said the U.S. is going to strike a deal with China that both countries "can be proud of for many years."

But President Trump said a deal won't be finalized until he meets with Chinese President Xi Jinping face-to-face, which will reportedly be sometime in February.

The meetings are part of a short-term truce both presidents called in December to achieve "needed structural changes in China that affect trade between the United States and China." White House press secretary Sarah Sanders said the two countries will also talk about China's pledge to buy a substantial amount of goods and services from the U.S.

The impact of the ongoing trade talks could go beyond just tariffs. A potential trade agreement between the U.S. and China would mean two of the biggest players on Earth had set aside their differences. President Trump said any deal they strike will be "by far the largest trade deal ever made."