The President Claimed The Iran Deal Expires In 7 Years. It Doesn't. 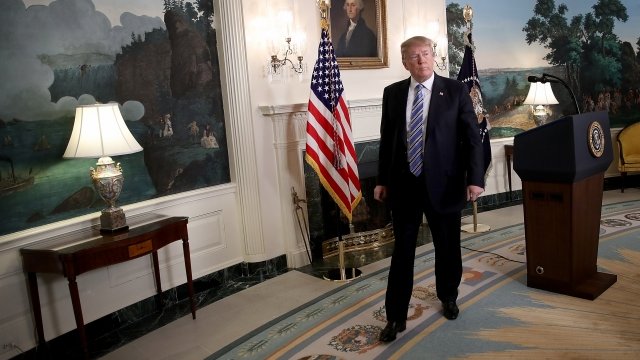 President Donald Trump claimed the Iran nuclear deal expires in seven years. That's not even close to the truth.

In the lead-up to his pullout from the Iran nuclear deal, President Donald Trump made some questionable claims about the pact. Take this one from late last month.

"You know, in seven years, that deal will have expired," the president said at a news conference. "And Iran is free to go ahead and create nuclear weapons. That's not acceptable. Seven years is tomorrow."

That's not true. The deal restricts Iran's ability to enrich uranium until at least 2030 — that's 12 years from now. According the Brookings Institution, the U.N. Security Council resolution endorsing the deal expires in 2025, and that's seven years from now. And at that time, Iran can start testing "large numbers of" advanced centrifuges.

But that doesn't mean the deal expires in seven years — far from it. The deal spells out stipulations that keep Iran from creating a nuclear bomb until at least 2030.