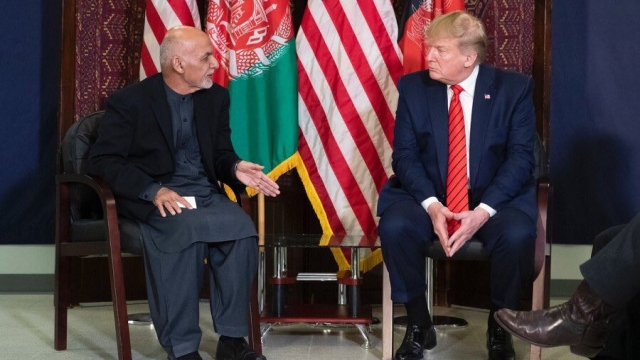 The war in Afghanistan started after 9/11, and the Taliban is the group that protected al-Qaeda extremists after the attacks.

In September, the U.S. and Taliban reached a peace deal "in principle." That agreement — which was brokered over a year of negotiations — involved withdrawing over 5,000 American troops from Afghanistan. But President Trump cut off negotiations later that month after the Taliban claimed responsibility for a suicide bombing in Kabul, which killed 10 Afghan civilians and one U.S. service member.

Then in October, Defense Secretary Mark Esper traveled to Afghanistan to officially restart the talks. He said the objective in the renewed discussions was still the same: to negotiate a peace deal between the Taliban and Afghan governments. When he met with Afghan President Ashraf Ghani, Esper said they agreed that "Afghanistan must never become a safe haven for terrorists to attack the U.S."

There hasn't been much of an update since then, but the president said this at his meeting with Ghani:

"And they want to make a deal, so we'll see what happens. If they make a deal, fine, if they don't make it, that's fine."

Ghani tweeted after the meeting, "Both sides underscored that if the Taliban are sincere in their commitment to reaching a peace deal, they must accept a ceasefire."

The New York Times reports that the Taliban's never publicly indicated it'll agree to a cease-fire, but it has shown an openness to negotiation with Afghanistan once the U.S. leaves.

President Trump said Thursday the U.S. will reduce the number of U.S. troops in Afghanistan to 8,600. But he said the U.S. won't leave entirely "until we have a deal or we have total victory."