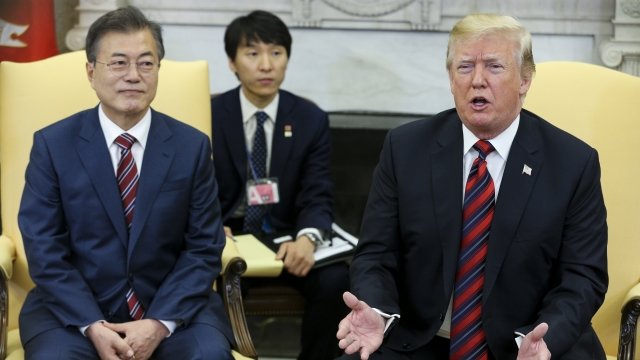 That's probably pretty troubling for South Korean President Moon Jae-in to hear. Moon has been spearheading diplomatic efforts between the North and the South, including bringing Trump and Kim to the table for a prospective summit in June.

The former governor of New Mexico and ambassador to the UN has negotiated with North Korea before. He says quick solutions will be difficult to find.

Now that summit date is in jeopardy. Trump is reportedly worried that he's given Kim too much leverage by appearing too eager to reach an agreement.

The prospect of a summit has prompted a freeze in North Korea's nuclear testing and a nice boost in the polls for Moon.

But the window for tough negotiations might be closing. Kim's recent meetings with China could take the pressure off of his regime and strengthen his hand in any talks.

During his meeting with Trump on Tuesday, Moon stuck to the tactics that helped pave the way to the Trump-Kim meeting: emphasizing the monumental nature of the event and giving Trump lots of credit.

Moon said, via translator, "All this is possible because of you, Mr. President, and I have no doubt that you will be able to complete, ah, accomplish a historic feat that no one had been able to achieve in the decades past."