Trump Said Second North Korea Summit Will Be 'Quite Soon' 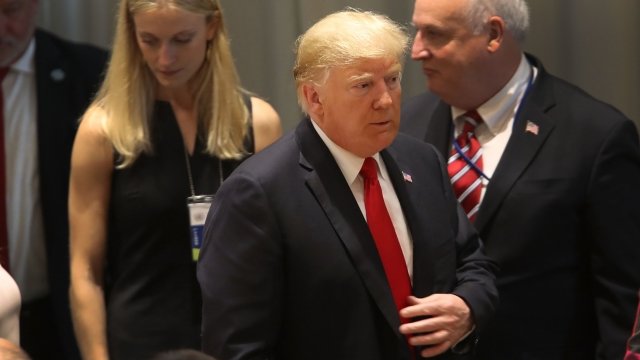 By Stephanie Liebergen
September 24, 2018
The optimistic outlook from President Trump is a change from last month when he cancelled Sec. Pompeo's trip to North Korea.
SHOW TRANSCRIPT

The Trump administration seems optimistic about the progress being made with North Korea.

"These are the U.N. Security Council resolutions that demanded that North Korea give up its nuclear weapons program. ... And we're working to assist in implementing them and to help Chairman Kim get to the right place to honor the promise that he made to President Trump in Singapore," Pompeo said.

"Are you optimistic that he will come through?" a reporter asked.

"We'll have a second summit quite soon. As you know, Kim Jong-un wrote a letter — a beautiful letter — asking for a second meeting, and we will be doing that," Trump said Monday.

That positive outlook is a change from last month when Trump abruptly canceled Pompeo's trip to North Korea, citing a lack of progress.

When Trump and Kim first met in June, the two leaders signed a pledge to denuclearize the Korean peninsula, but that agreement was short on details.

While Trump said a second summit could happen "quite soon," it seems there's more planning to be done. Pompeo said he expects to travel to Pyongyang first to iron out details, and he hopes to make that planning trip before the end of the year.